Manthorpe Building Products have been making subtle but effective modifications to their pioneering Swift Brick designed in conjunction with the RSPB and Barratt Developments Plc.

As one of the fastest birds on earth, the swift is quite astonishing. Not only can it fly at speeds of up to 68mph, but it is also capable of travelling an average daily total of 497 miles, not bad for a bird that is only 16-17 centimetres long!

Swifts are aerial acrobats spending 10 months of the year on the wing; feeding, mating and even gathering nesting material whilst in flight. They can land on nest boxes, houses or even cling to inaccessible vertical surfaces but they can’t really land on the ground due to their short legs and long wing span.

Every year these birds return to the UK only to land and breed. Swifts pair for life, meeting up each spring at the same nest site, usually a hole or cavity in the roofs of older buildings and this is where the problem lies. Changes in modern house building techniques and the renovation of older buildings coupled with our desire for more energy efficient, less accessible homes has had a negative effective on suitable nesting sites.

Providing more nesting sites for swifts has been one of the aims of the partnership between the RSPB and Barratt Developments Plc which was launched in 2014 to look at how nature and wildlife could be incorporated into new communities. We were brought onboard by the RSPB and Barratt Developments Plc to design and develop a new swift nest box that could be easily installed during construction. Working closely with the group Action for Swifts a cost effective and lightweight design was developed for production. Being plastic, the design brief was to ensure it was fully drained, ventilated and unobtrusive by matching the colour of the bricks. 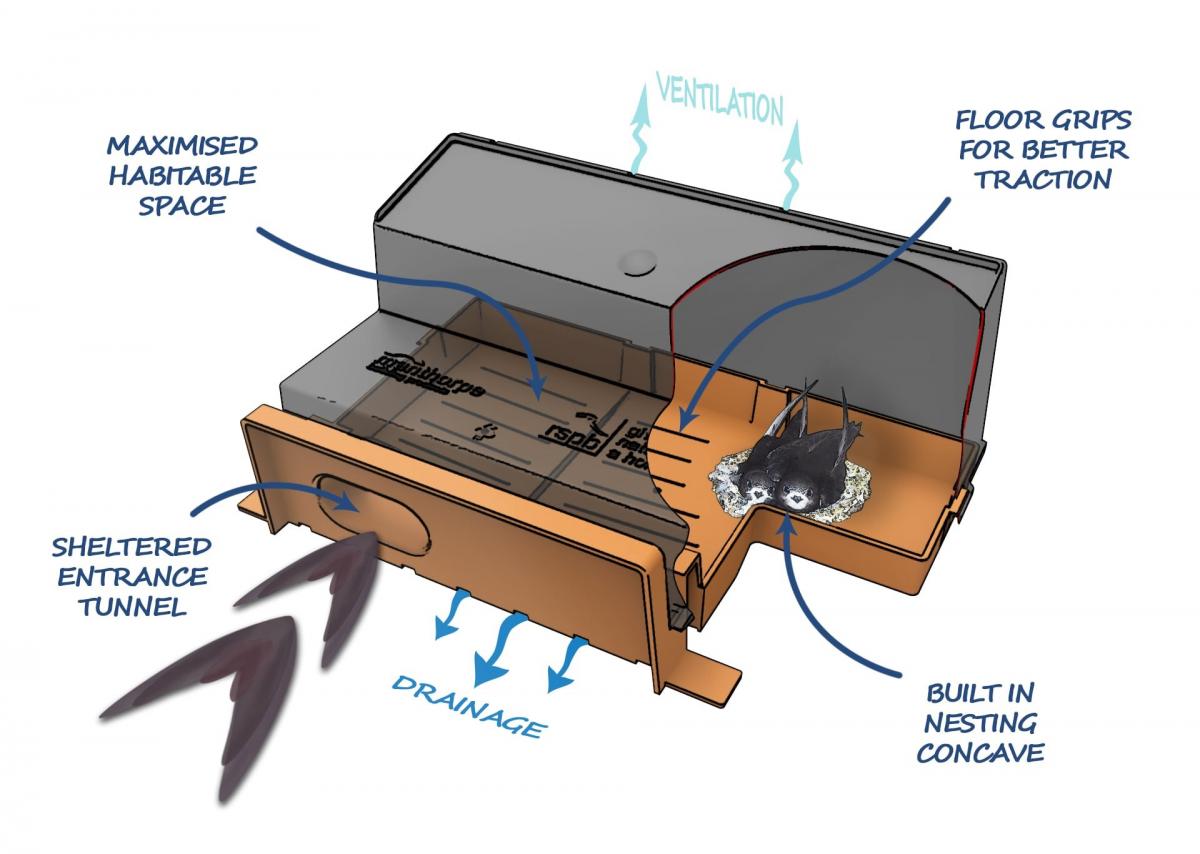 Integrated nest bricks for swifts are not a new idea. Their use has been increasing in recent years. With the early and continuing pioneer work taking place in and around Exeter and the west country and now spreading across the UK. Among the first Barratt Developments Plc housing developments to pioneer this nature friendly approach was Ottery St Mary near Exeter and Kingsbrook in Aylesbury Vale where 2,450 new homes, a new school and community facilities were built around a green infrastructure that includes orchards, hedgehog highways, newt ponds, tree-lined avenues, fruit trees in gardens, bat, owl and swift nest boxes.

In just one year nearly two hundred of the specially designed nest boxes were installed into new Barratt Developments Plc homes being built at developments in Aylesbury and Exeter. Although a great success we felt more could be done to improve the nesting boxes for swifts.

At rest swifts have a unique and ungainly way of propelling themselves around, using their very strong claws to push themselves either in or out of the nest entrance hole. It is at this point when they are stationary and exposed that they are at the greatest risk from predators, especially the younger chicks who congregate near the entrance awaiting feeding and are at risk from falling.

With input from Deborah Lauterpacht a specialist in migratory birds, who works rehabilitating injured and orphaned wild birds in Cambridgeshire, we looked to counteract the slippery nature of the plastic. Deborah suggested that a more ‘grippy’ finish be added into which the swift could insert its claws to aid traction offsetting the risk of nesting swifts sliding out by accident.

The nesting bricks now have a granulated entrance hole along the entire front of the brick to aid traction and provide improved grip to both the entrance tunnel and the immediate edge below which the birds use as a ‘landing pad’ before entering the tunnel. The exterior sanded finish has a secondary benefit, this time for the homeowner, as it is more aesthetically pleasing allowing it to blend seamlessly with the brickwork.

We hope Barratt Developments Plc’s ground-breaking developments and future projects will help to better inform other housing developers and interested stakeholders about the benefits of providing a hospitable nesting place for swifts contributing to a reverse in their decline.

Find out more about giving swifts a home >

From our first foray into the building industry through to our latest product innovations, Manthorpe Building Products has grown year on year thanks to a philosophy of continuous investment and development.

At Manthorpe we pride ourselves on our high quality standards, not just for the products that we produce; but for our design, manufacture, sales and delivery processes as well.

Innovation has always been at the core of the company.  From new technology investment to in-house research and development, Manthorpe is constantly looking ahead to meet the needs of the industry.

Request a Call Back

Request a Call Back